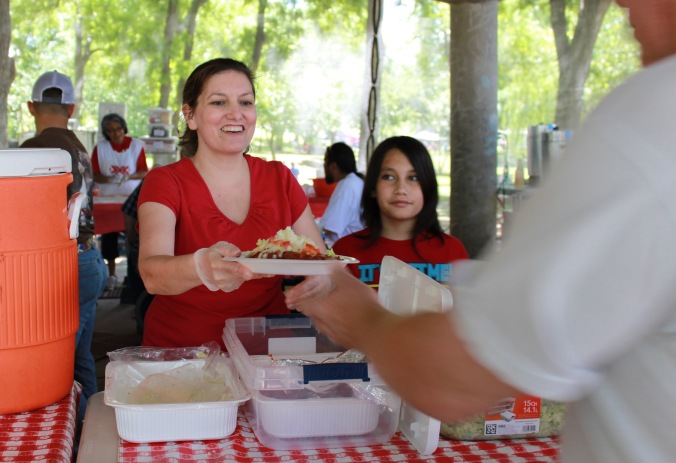 Press Release by Roseanne McKee prepared on behalf of BIWC

“Every function that we have that we make money, we give a third of that to our scholarships,” she explained.

Treasurer Connie Edwards and President Sandra Jamison were among those who ran the cash register. According to Edwards, this year they hope to serve more than 1,000 tacos.

“This year has been much better because the weather has been better. Friday night we didn’t have rain. The past two years we had lots of rain. [This year] we’ve had more people come out,” Armstrong said.

Edwards said, “[w]e’ve been selling Indian Tacos at SunFest since before our time; we’ve been doing this about 30 years.”

Carmen Ketcher said, “They used to have SunFest at Johnstone Park but then they moved it over here [to Sooner Park]. We looked in the minutes and it said, ‘no cutting onions on your lap,’” she said, laughing.

Ketcher has been volunteering at the Indian Taco Fundraiser from the beginning – for 30 years.

When she began she said, “I was just a young kid. I was a flunky and I did anything they wanted us to do. Let me tell you though, those ladies, if you didn’t make good fry bread, it’d come flying back to you. They’d throw it back at you.

“I knew how to make fry bread already from my mom, but only in small batches. We didn’t make it for thousands, so it was a new experience.”

Ketcher was a quick study, and has been one of the primary fry bread makers at the fundraiser for the past 16 years. When not making fry bread, “I’d be at the line, or chopping onions. We used to do all that at one time.”

Armstrong, who has been volunteering for many years, said “I’ve been doing the chili for probably the last six years. As the older people left, new people took up the duties. I don’t do fry bread, so I do the chili. We cook the beef ahead of time, add the chili powder and then freeze it.”

The fundraiser requires a lot of planning ahead. For volunteers, the Indian Taco fundraiser is a five-day commitment, Edwards said. “On Thursday, we go to storage and get everything, which takes about six hours.”

Edwards continued, “We have two refrigerators loaned to us free by Aaron’s rental center in Bartlesville. A third refrigerator was provided by Carmen Ketcher. We have five large electric roasters to hold the chili. We purchase lettuce and cheddar cheese already shredded, and tomatoes and onions, already diced, from Fresh Point of Oklahoma in Tulsa. Then we all just shop on the side. We go to Sam’s Club and haul it around.”

This year, 200 pounds of 80/20 ground beef were prepared for the meat portion of the Indian Taco. At this year’s event, “we’ve used 20 gallons of pinto beans and 250 pounds of self-rising flour for the fry bread. We purchase the ground beef from United Grocery. They are really good to us,” Edwards said. The pinto beans, tomato paste and flour are purchased locally from Watts Distribution.

“We have cans of evaporated skim milk on hand to make the fry bread because recipes vary. Carmen and I use water, but some of the members use milk,” Edwards explained.

In making the fry bread the consistency is important. “You can’t make the dough too thin or they won’t puff up right,” Edwards added.

Edwards has personally been volunteering at the event for 15 years. Her motivation is to fund the scholarships for Native American students.

This year the students who volunteered at the fundraiser were: Kolton Kittering, Michael McKee, Duel Brown, Brook True, Jaclyn True, Heather and Hailey True. These are past, present or future scholarship recipients, Edwards said. Her grandson, Ford Gilliland, and her daughter, Amanda Gilliland, worked on the serving line assembling the Indian Tacos.

Looking to the future, Ketcher said, “[w]e need young people to take over this responsibility. Participating in this event and being a member is an opportunity to learn something about their culture.”

After these announcements, each club member was given a candle. Ketcher lit her candle first and then shared her candle’s flame with Sandra Jamison. This process continued until all of the candles were lit.

Then Ketcher told Jamison: “We’re all different tribes, we’re different people but we’re all united under you. Good luck — two years of fun and good times!”

Founded in May 1935, membership in Bartlesville Indian Women’s Club is an opportunity for women from every tribe to come together to share their culture. One of the objectives of the club is to raise money for a college scholarship program to assist Native American students. This luncheon is an opportunity to celebrate all of the hard work the club does throughout the year.

Treasurer Connie Edwards, a member for 25 years, who is Potawatomi and Cherokee, said, “the [educational] scholarships are awarded at $500 – $800 per year for four consecutive years. Students fill out a renewal form each year to continue the scholarship. On the renewal application, we require a passing grade and at least 15 college hours per semester. Right now we have 16 on scholarship, some of whom will graduate this year.”

To raise funds for their service projects, the club holds several fundraisers annually.

First, the sixty-fifth Wild Onion fundraiser dinner will be held in the spring at a location to be decided and date to be advertised.

Second, the club holds an Indian Taco Fundraiser at SunFest in Bartlesville, which requires a three-day commitment from club members.

Each year the Indian Women’s Club provides a meal at the Washington County Free Fair, which is held in September at the Dewey Fairgrounds.

The club also offers two types of style shows to groups for a fee. The style shows not only raise funds for service projects, the shows are ways of preserving tribal traditions, promoting continued growth, and awareness of Indian heritage, which are among the club’s written goals.

Outgoing President, Carmen Ketcher announced that this year the club will have a style show in early August for the Marine Corps Convention in Tulsa at the Osage Nation Casino.

“The club also offers a shorter format style show lasting 30 minutes. At this type of style show the models describe their clothing. This is a high-energy, fun show, mostly for bus tours and locals,” Ketcher said.

To book a style show for your group or event, contact the Indian Women’s Club Style Show Chairman Joanne Littleaxe at 918-336-3498.

The club meets the second Thursday of the month at 11:30 a.m. The club does not have meetings during the summer. The club shares the building with several other clubs in Bartlesville known as the Women’s Club Building, located at 601 Shawnee Ave. in Bartlesville. Anyone needing a meeting place can call 918-335-1361 for rental of the building or other information.

Call Accent Pest Control for Pest Treatment Services in Pawhuska at: 918-336-5942. CLICK THE MOUSE PHOTO TO VISIT THEIR WEBSITE!