At a special meeting held March 23, the Pawhuska School Board voted against the idea of switching to a four-day school week by a vote of 3-2. Board members voting in favor of the four-day week were Patricia Wilson and Jeff Bute, reasoning that teacher recruitment and morale would be improved. Those against the switch cited the need to raise academic scores and lack of student supervision on the extra day off.

During the discussion, board members Lori Loftis and Christi McNeil indicated support for the five-day week already in place. Board president Justin Sellers did not reveal his position prior to the vote.

Jeff Bute began by saying that he had reviewed several studies by Indiana University from 2002 – 2011.

“Essentially, there are not a lot of numbers out there. If you’re a numbers guy, you’re not going to like it,” Bute explained.

Nonetheless, Bute said, he had found the studies helpful in providing criteria for comparison of those districts with the Pawhuska Public Schools.

According to Bute, schools that had been successful with a four-day week showed positive results in: improved employee morale, academics and money saved. However, he acknowledged that he had not studied the four-day week from a financial standpoint.

“If we go to a four-day week, we’re still required to give 1,080 hours of instruction time to our students. All we’re doing is adjusting the schedule and plus we leave open an opportunity – an open day to actually do some tutoring and other enrichment,” Bute said.

Thereafter Bute made a motion “to adopt the four-day school week for the 2015-2016 school year and provide class offerings on the fifth day, which may include, but not be limited to, enrichment, credit recovery, and tutoring on that fifth day. This motion would be subject to successful negotiations with the negotiation team and for the successful development of a school calendar.”

After some discussion, board member Patricia Wilson seconded the motion.

After emphasizing that this was a community decision, Superintendent Berry shared that his concerns about the four-day week impact on: academics, student supervision and nutrition on the fifth day, longer school days for young students and the reduction in available professional development days.

Dr. Berry added that he did not have any proof that the four-day week would improve test scores.

Board member Christi McNeil asked if there were great gains in academic achievement in the schools that switched to a four-day week.  Bute responded by saying there were academic gains and in the larger school districts that were similar in size to Pawhuska’s school district. McNeil also inquired about the socio-economic impact. Bute responded by indicating that he did not study the socio-economic impact, but that he had found that schools were academically successful when they were able to utilize the fifth day for academic enrichment. He said that Montana and Georgia schools had used 4-H on the fifth day for such enrichment, which is free. Locally, he said the 4-H administrator was willing to become involved in such an endeavor.

McNeil indicated the need to study the cost of fifth-day enrichment tutoring before the school adopted a four-day school week.

Dr. Berry interjected, reiterating that the fifth-day enrichment would not be part of the teacher-contract negotiations.

McNeil finished by stating that students could not be required to attend fifth day enrichment tutoring. Dr. Berry confirmed this.

(L-R) Osage Hills Elementary School teachers Jennifer Gilkey and Mindy Englett at the Rally for Education held at the state capitol on March 31, wearing the tee-shirts Englett designed which read “In it for the outcome…not the income.” 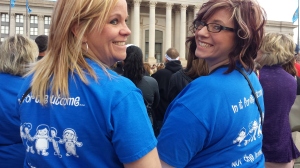 Call Accent Pest Control for Pest Treatment Services in Pawhuska at: 918-336-5942. CLICK THE MOUSE PHOTO TO VISIT THEIR WEBSITE!