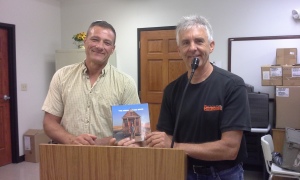 Hank Benson and Rick Geisler spoke to the Pawhuska Kiwanis Club about the tiny houses they are building in their spare time.
Benson said that Geisler has built two tiny houses on permanent structures at the Settle Inn RV Park in Pawhuska, which have been popular rentals since they were built.

Benson, who owns Benson Lumber in Pawhuska, said he drew inspiration from The Small House Book, published in 2012 by Jay Shafer, who is a leader in the tiny house movement.

“He got tired of living the American dream of having a bigger house and more space to take care of, more things to go wrong,” Benson said. “He built this first house of his, and left Iowa and went to California.”

Once in California, Shafer met a woman who had many acres of Redwoods and she asked him to be the caretaker of the site, Benson explained.

“Right now, he is developing a tiny home village in the San Francisco area. They now have their regulations gathered up and it will be interesting to see how that works out this year,” Benson explained.

“I bought the book for the plans, but as I read the book, he’s really sharing a philosophy of living,” Benson said.

Shafer’s philosophy is to focus on relationships rather than possessions, modeling his lifestyle after European traditions of communities with houses built closer together, narrower streets and more interaction with neighbors. 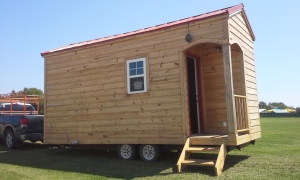 Initially, Benson and Geisler began with leftover lumber and materials.

“We thought well, we’ll be good stewards and we’ll turn these under-utilized or non-utilized materials into what we think will be an attractive small space for a hunting cabin or a fishing lodge, oil field waiting shack, office, guest house,” Benson said.

“Rick processes a lot of cedar for his cottages,” Benson said. “He got into milling, sawing of boards. His sons got involved. Both of them live in Colorado and went to a tiny home seminar.”

Geisler said people compliment him on the cedar scent of the tiny homes he constructs, which feature locally-harvested cedar on the interior and exterior with metal standing-seam roofs. He saw an opportunity to utilize the abundance of cedar in this region and to rid farmers and ranchers of the unwanted trees, which soak up ground water. 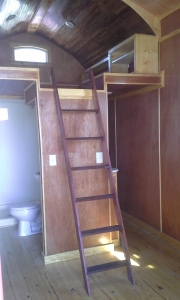 Geisler: “We’ve got more cedar than we need. I’ve got a place up in Kansas that I cut cedar down and bring it to the mill and make siding, we build bathroom lavatories out of logs and we build a little bit of everything out of them – Murphy beds.”

Building tiny houses is something Geisler, who manages the park at Hulah Lake for the Osage Nation, and Benson, who owns Benson Lumber in Pawhuska, do in their spare time. As a result, construction takes about four weeks start to finish, Benson said.

After the meeting adjourned, Kiwanians were able to go to the parking lot and tour a tiny house Benson had recently finished. 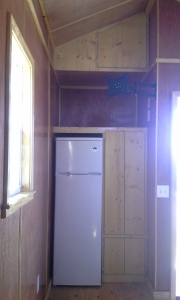 “If at some point in time they are deemed real property and are the primary residence, that could benefit the borrower with lower interest rates,” Allen said.

“It’s kind of unclear yet until the city and the state decide how they will characterize these structures. I’m not sure that’s our call but we’ll abide by what they decide. For now, we plan to have a security agreement and a UCC (Uniform Commercial Code) financing statement and to make fixed rate, five-year loans,” Allen said.

Regarding plumbing, the homes are set up to connect directly to the city water and sewer system, Benson said.

The exterior of the house is made of yellow pine with a spar varnish, which is used for exterior structures, Benson explained.

The interior is finished in several types of wood.

“We tried to mix it up,” Benson said.

“The cabinet doors show some of the knots, which improves the aesthetic,” Benson said. 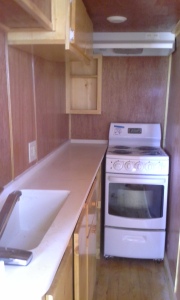 The upstairs loft has a rounded wood ceiling reminiscent of a ship’s cabin. The loft can accommodate a queen-sized bed, and has storage along the walls.

“That is reclaimed oak flooring on the [loft] ceiling. It took a bit of extra labor but it adds architectural style in the loft area,” Benson said.

There are requirements for moving these structures across highways, Benson said. In order for a structure to be transported over public highways, it needs to be no more than eight ft. by six ft. wide on a trailer and 13 by 6 ft. tall.

Some questions about home identification still need to be determined Benson said. These structures can be placed on permanent foundations as they have been in the Settle Inn RV Park. In such case, the home might be characterized as real property and be subject to ad valorem taxes.

“We don’t know yet. RVs have serial numbers, but we’re treading on new turf and we don’t’ know what the county assessor will say. I can say that it will be very interesting to see.”

If the home is not on a permanent foundation, it may be deemed by the state to be in the same category of mobile homes, which are issued state tags.

“Rick and I went to Hernandez one evening recently. We had rubber-necking and one person was interested in getting one as a hunting lodge and so she asked the state tag office how the home would be identified – by tag or serial number.”

The state tag office has not yet answered this question, Benson said.

Benson was asked how small a home could be and still be allowed on a lot within the Pawhuska city limits. He does not yet have the answer, but is aware of certain housing space requirements. 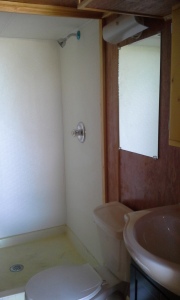 “Your kitchen has to be fifty square feet, your bathroom has to be about 30 sq. ft because you need 36” of space in front of the shower. If you have a habitable area, it has to be a min. of seven ft. ceilings and has to be 70 sq. ft. to be a habitable room,” Benson said.

“Now I’ve seen in some of the building books that people are coming up with buildings in the 400 sq. ft. range – two bedroom, sometimes three bedrooms,” Benson said.

“To keep them out of HUD requirements, we keep them under 400 sq. ft.,” Geisler.
Benson’s children attended Oklahoma State University (OSU) and this gave him an idea.

“There are a lot of parents are tired of paying housing costs for their children at universities. My mission for them is to contact the architectural engineering department, the construction management department, take Rick down there, and say what about all the property you have left over where all those houses were north of the stadium, wouldn’t it be beneficial short-term use until it gets more fully developed.”

Benson said he even envisioned a friendly competition. “Wouldn’t it be fun to have a little competition between universities to see who would have the best style, function, energy costs and just like they’re doing with the racing teams and aviation flight school at OSU, we could see if they could do that in this industry and see what they could come up with.

Another project Benson has planned is a fifth wheel home.

“We’re going to a fifth wheel house which will have its own elevated bedroom area at the top, an eight-by-eight living area, kitchen and bathroom separated between the two spaces.”