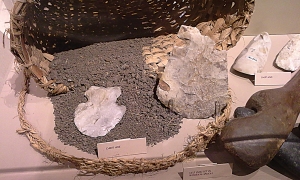 Archaeologists at Cahokia excavated an area that had previously been used as a drive-in movie theater in the 1980s. They dug down until they reached the level of the Mississippian period over an area covering several hundred square miles. There were many houses there. When the archaeologists find something it is called a feature, such as a circular area of discolored soil that indicates a storage bin, the museum’s archaeology exhibit video narrator explained.

“At Cahokia the small arrowheads found in mound 72 … we have an idea that these materials are from an area near the Spiro site in Oklahoma — some hundreds of miles away,” the archaeologist on the museum video said, which shows Cahokia’s link to Oklahoma.

“Over the years there have been many field investigations at Cahokia, including the excavation of mound 72 and the dig that revealed Woodhenge,” the archaeologist on video said. “In the 70s a highway project led to the most massive field investigation ever conducted in this region. Many communities from Cahokia’s time were found allowing scientists to study how these smaller towns interacted with their much larger neighbors. Field investigations of a site, which occur just before a site is to be destroyed by construction, are called salvage archaeology.”

Another example of salvage archaeology is the location of the Cahokia museum itself.

Because it is some distance from Monks Mound, the greatest mound, the excavation of mound 72 revealed information about how ordinary people lived. The careful collection and excavation was meticulous work, but necessary to increase knowledge of Cahokia, the video narrator said.

Monks Mound (mound 38) received its name from the group of Trappist Monks who lived on one of the nearby mounds, according to the Cahokia website. “The Monks never lived on the biggest mound but gardened its first terrace and nearby areas,” the Cahokia website states.

Once archaeological finds were gathered, follow-up work took place in the laboratory, which included: identifying, cleaning, labeling the fragments found and preparing them for analysis.

The archaeological remains from the dig were highly fragmented, even stone tools, the video explained. Tools, such as hoes and spears and arrowheads, were studied to determine the time period they are from and what they were used for.

Similar work takes place in the botanist lab where plants/seeds found are compared with today’s plants and seeds.

In this excavation, archaeologists learned that the diets of people had declined as their intake of carbohydrates increased over time.

The reason Cahokia began to decline sometime in the 13th or early 14th century remains a mystery. The society may also have declined over many years as Cahokia’s authority was challenged.

According to the video overview of Cahokia, “poor nutrition and disease were growing problems. Weather changes and climate, dwindling resources and a growing population or perhaps growing class warfare, conflicts within the group, or from the outside also contributed to the decline.”

Present-day archaeological digs are ongoing and so continue to reveal information about the people who inhabited the 2,200 acres known as Cahokia.

To learn more about Cahokia or to plan a trip, visit the Cahokia website at https://cahokiamounds.org/.