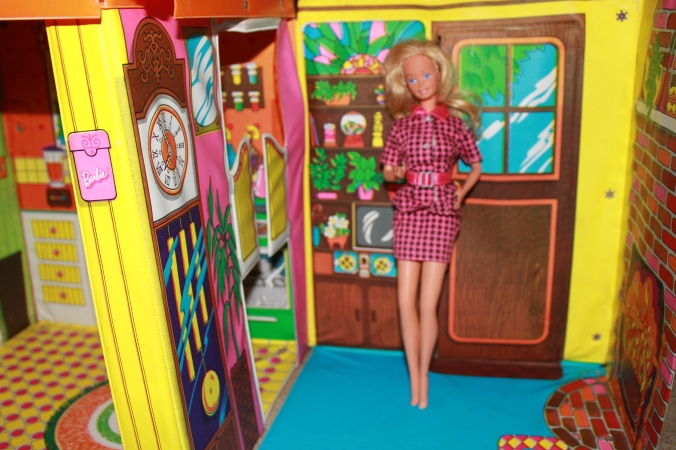 My favorite childhood toy, Barbie, turns 60 on March 9. To celebrate this milestone, I wanted to share some of my memories and some fun Barbie facts.

The first Barbie I received, at the age of four, was a hand-me-down Barbie with the eyelashes that were part of the mold. She always looked angry to me and her hair was curly and matted from years of use. I did not bond with her.
My second Barbie was much better in my opinion. She was Malibu Barbie. She was tan and had painted on eyelashes, bright blue eyes and she arrived in a one-piece light blue bathing suit with a yellow terrycloth towel. I have a vague memory that she also had round tinted sunglasses, which were soon lost. Malibu Barbie was my first, and forever favorite, Barbie. She was a reflection of what I wanted to be.

Soon I began accumulating other Barbie dolls and accessories. One that I recall being a favorite was Barbie Sweet 16, which came with a compact filled with real blush in tawny and rose colors, a brush, a comb, barrette and stickers. I also received Mod hair Ken, who had real black hair instead of molded hair and several stick-on mustaches and sideburns. So fun!

Life got even more exciting when my Uncle Bill departed from his usual robot Christmas gifts and gave my sister and me each our own Barbie campers when I was in 3rd grade. The just-out-of-the-box new plastic smell represented the scent of happy times ahead.

Opening that camper is still one of my best-ever memories. The orange camper had a fold out tent on one side, a folding camp-style chair and stickers to put on the camper.

My sister and I also got the Barbie Airship to share. When we found it recently going through my mother’s possessions, she claimed it, and I let her.

However, I proudly brought home the Barbie Country Living Home. The campers were nowhere to be found, I am sad to report.

When I was in 4th grade, a friend was moving to California and her mom put her Barbie Surprise House in their moving sale. Mom wouldn’t buy it for me but in the end the mother gave it to me. I was over the moon!

It was my first Barbie house, but I don’t recall much about it except that it had two rooms on the first floor and one on the second.

The next home I acquired was The Country  Living Home (or Country Livin’ Home) consisting of three rooms, which folded up and had a handle for easy carrying. This house had furniture for a living room, eat-in kitchen and living room.

During my childhood, I also acquired the Barbie Townhouse, which had three floors and an elevator, a Barbie pool and a Barbie bicycle.

Now, here are some fun Barbie factoids I found.

However, many may not know that Barbie was based on a racy, grownup German doll, marketed to adults.

According to the website http://mentalfloss.com/article/21036/facts-about-barbie-doll, the concept for an adult doll came from Mattel co-founder Ruth Handler. While in Europe with her children, Handler came across the German Bild Lilli doll, a high-class call girl who began her life as a comic strip and was sold in smoke shops and adult toy stores.

Handler had pitched the idea of an adult doll to her Mattel exec husband before and although her husband had initially rejected at the idea, seeing the Lilli dolls changed his mind.

Bild Lilli’s manufacturer sued Mattel for patent infringement, and the case was eventually dismissed. Thereafter, Mattel officially bought the rights to the doll for $21,600.

The first Barbie retailed for $3. Today, the same Barbie, in mint condition, is worth $27,450, according to the mentalfloss website. The website also states that Barbie was created by an engineer who had previously worked for the Pentagon.

The engineer, Jack Ryan, is the so-called “Father of Barbie”—also helped design the Chatty Cathy doll, which my husband got as a Christmas gift — not his favorite but he adapted by making Chatty Cathy go fast in his fleet of toy trucks.

Here are some Barbie facts from the website the historyofdolls.com.

• One Barbie is sold somewhere in the world every three seconds.
• Barbie has three sisters Skipper, Stacie and Chelsea.
• The first clothing that Barbie had when she appeared on the market was a black-and-white striped swimsuit.
• Barbie’s full name is Barbara Millicent Roberts, and both Barbie and Ken were named after the son and the daughter of Ruth Handler — Barbara and Kenneth.
• Barbie’s parents are apparently George and Margaret Roberts from Willows, Wis. Other family members include her siblings: Skipper, Tutti, Todd, Stacie, Kelly, and Krissy. Tutti and Todd are twins — but so are Todd and Stacie, apparently (at least according to Todd’s box). She also has cousins named Francie and Jazzie.
• Only adding to that whole twin sibling mystery: Tutti mysteriously disappeared in 1971, so we can only assume that Stacie (introduced in 1992) is Tutti reincarnated.
• Mattel, manufacturer of Barbie, sued MCA Records, for whom band “Aqua” recorded song “Barbie Girl” because they allegedly violated the Barbie trademark. Mattel lost.
Over the years, there have been some Barbie missteps. Here are two.
• In 1963, Barbie came with an accessory book titled “How to Lose Weight” on the back of which was printed “Don’t eat.” In 1965, same book came together with accessory scales which were permanently set to 110 pounds.
• A doll that arrived on the scene in 1975, when I was 10, was Growing Up Skipper. Skipper, Barbie’s kid sister, had been introduced in 1964 by Mattel. This Skipper grew taller and sprouted breasts with the twist of her arm. Yikes!

When I was a child, Barbie’s focus was personal style and fashion and while it is true that her first career was as a teen model, in years since Barbie has pursued many loftier careers for which I am proud.