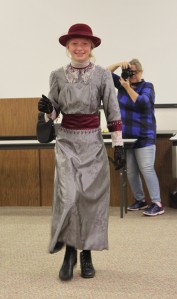 HOMINY — Martha Ray is a woman with a passion to preserve and share a window into the fashion past.

Ray, who is retired from the Oklahoma Historical Society, brought a group of volunteers from Pawnee who modeled clothing from the American Civil War era through the 1950s at the Drummond Home’s style show fundraiser Saturday, held at the Osage Interlocal Co-op.

“In the 1840s and 50s it was not typical to wear drawers. … At a fox hunt Queen Victoria stood on a rail to get a better view, and one of her friends fell over the fence and her hoop skirt went up. She had on plaid flannel drawers and everyone saw them. People thought, if it’s good enough for them, it’s good enough for us. From that point on, it was the norm to wear drawers.

“In the 1850s a lady would have had eight layers on,” she said. “There was a chemise, or a slip that fell to below the knee, then a corset measuring eighteen inches with a four-inch gap in the back, so the actual waist size would have been about 22 inches. Then there was an under petticoat; there were eight to ten layers before the hoop ever went on — a hoop, and two layers over the hoop. Sitting on a horse hair sofa — that hurts — so the layers helped.”

Although the actual dress would not have been washed much, the many layers of undergarments were washed after each use.

“In the Civil War period, there was hem tape sewn around the bottom of dresses which would be replaced if it got dirty,” Ray explained.

“A typical woman in the 1880s had four outfits — three she wore every day and one for formal occasions — church, parties, to marry and to be buried,” she said.

“In the U.S. practicality dictated fashion, but we had everything available in Paris. It just took six months to arrive,” Ray said. “Seamstresses were worth their weight in gold because they made the dresses without patterns for any size lady.”
Dress lengths and styles varied widely throughout the years highlighted in the style show. There was pigeon breast fashion in the 1910s, flapper dresses in the 1920s, ballgowns, bustles, hoop skirts, A-line designs, sequins, beads, gloves, hats with seasonal embellishments, picture hats that framed the face, the walking suit, dresses with trains that had skirt lifters built into them and split skirts worn with riding habit accessories, to name a few.

In the 1880s girls were sent away to finishing school and wore shorter skirts. When they wore dresses to the ankle, that signaled to society that they were of marriageable age, Ray said.

Ray provided a window into the Victorian era’s polite society by sharing about the custom of visiting neighbors each week.

“Everybody had a day they received visitors,” she said, and each household had a designated day and window of time to receive visitors. Others took note of that time and did not receive visitors at that time — “usually 2-4 p.m. or 4-6 p.m. only one day per week.

“Even if you were middle class, you’d have a butler that day to receive guests. He’d bring calling cards on a tray from those who wished to visit and ask if you wanted to receive them, ” Ray explained.
If the lady of the house agreed to receive the guest, they would stay for only a short time — about 15 minutes. It would have been considered rude to stay longer.

“Then the next week, you’d return the visit. It was rude not to do so,” she said.

“When we do a reproduction dress, we try to find fabric that’s as close to the original as possible. For reenactments, we find fabrics of the same fabric content,” Ray said. “If it is a style show, fabric is more about the appearance of the original matching. We try to use glass beads rather than plastic.”

Speaking of one garden dress in the show Ray said, “we’ve reproduced it down to the number of buttons.”

With each outfit, the models carried a handbag, which was called a reticule. Inside would have been three important items — a hanky, powder and smelling salts,” Ray said.

“People had a problem with bathing, so if people around her smelled bad, she would smell the salts to revive her,” Ray said. While deodorant was readily available over the counter starting in the 1930s, it didn’t become popular until later, she said.

“You can tell if a reenactment event is authentic by the way they smell,” Ray said.

The style show guest tables had a fairy theme.

“Fairies were quite popular in the Victorian era and in literature,” Martha Ray, who narrated the style show, said.

The style show concluded with door prizes and refreshments.

To learn about upcoming events at the Drummond Home, visit their Facebook page, Frederick Drummond Home of the Oklahoma Historical Society.

The next event will be their annual Scottish Christmas Open House, Saturday Dec. 8 from 1-4 p.m., with live music, storytelling, homemade Scottish shortbread, cookies and punch at the Drummond Home at 305 N. Price Ave. in Hominy, Okla. Call for information at 918-885-2374.