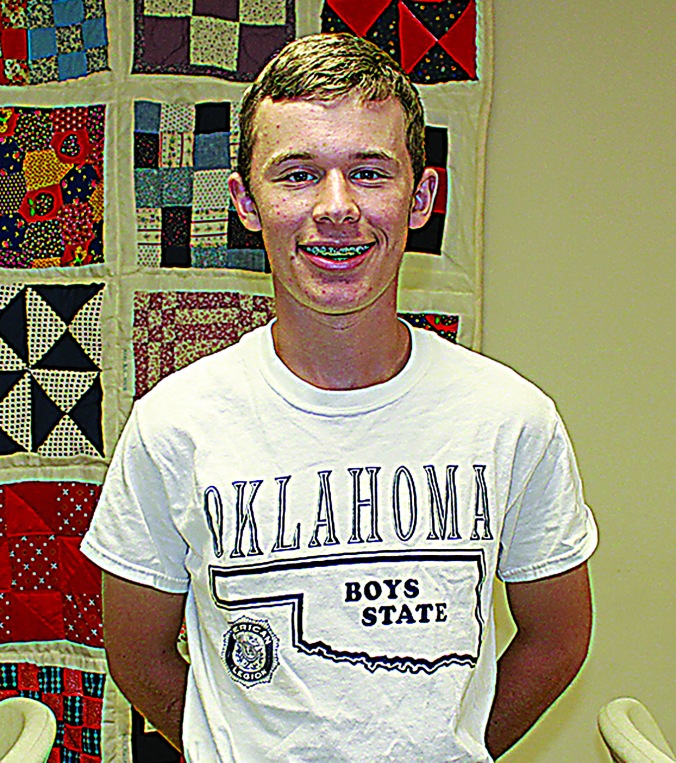 The Chris Gailey American Legion Post 450 in Ochelata chose Weston Moses, 17,
to attend the American Legion Oklahoma Boys State, a weeklong camp, hosted annually by the American Legion.
Moses, a senior at Caney Valley High School, described this year’s Boys State as a life-changing experience. The camp, in its 79th year, took place starting the last Saturday in May at Northeastern Oklahoma A&M College in Miami.
The week began with marching exercises and concluded with learning to run a government.
“We learned how to get into formation like someone in the military would do. We did trust exercises and learned how to properly carry the flag,” Moses said.
Moses described some of the other things they did at the camp.
“One thing that I thought was real neat was we learned how to salute higher ranks in the military — the way a sergeant would salute a colonel,” Moses said.
He demonstrated the salute as he spoke: “You stand with your feet heels touching at a 45 degree angle and hold your hands at your side like you’re holding a roll of quarters with thumbs down, shoulders back; then with your hand perfectly straight, keeping your chin and eyes forward, you salute. After the colonel salutes, you don’t put your hand down until they do.”
“To me there’s no better way to highlight what we do as the world’s largest veteran’s organization. … I know that when these several hundred boys leave here every year, they know what American Legion is, they’re going to tell others about it and, hopefully, like me someday they’ll go on to serve and join themselves and carry on the tradition,” said Director of Oklahoma Boys State Clay Ballenger.
Speaking of is experience, Moses said, “I think a lot of it was about citizenship and Americanism — how to be a good role model in your community. Everybody has a role or a job in his community whether you realize it or not.”
The camp staff of about 30 demonstrated this by having the attendees learn about how to run a government. Students were separated into groups of 20, called cities, Moses said. The students remained in these groups for lodging. There were nine cities total, he said. The students elected boys within their groups to hold positions within each city and learn how to govern.
Moses also enjoyed meeting everyone at the camp.
“The sergeants and the colonels I met … you make a lot of connections,” Moses said.
Speaking of his peers, Moses said: “Those are friendships that will last for a while. They chose a group of boys who showed responsibility, respect and what they thought it was to be a true citizen. … Everybody I met at Boys State were people who put others before themselves.
“Attending was a big responsibility but I was very, very pleased to have been chosen — just the responsibility and the happiness it gives you to know you were selected as one of the most respected kids in northeast Oklahoma — every day showing your committed to respecting and putting others before yourself and your community,” Moses said.
Corey Brooks, the assistant director of Oklahoma Boys State said the camp was an opportunity to “get to know who you are as a team … as an individual … and who you’re going to be in the future as part of this great fabric of society.”
In fact, the experience influenced Moses’ thoughts about the future. “After graduation, I plan to join the Air Force and go into healthcare to get an EMT license. That would put me on the front lines in helping others during a disaster.”
Then, Moses plans to pursue a nursing degree at Oklahoma State University or the University of Oklahoma, he said.
The Chris Gailey American Legion Post 450 meets the second Monday of the month at 7 p.m. at the Caney Valley Senior Center in Ochelata. To join this post, or to nominate a student for next year’s Boys State, call the Post Commander Ray Raley at (951) 218-2708.