Republished by permission of the Examiner-Enterprise 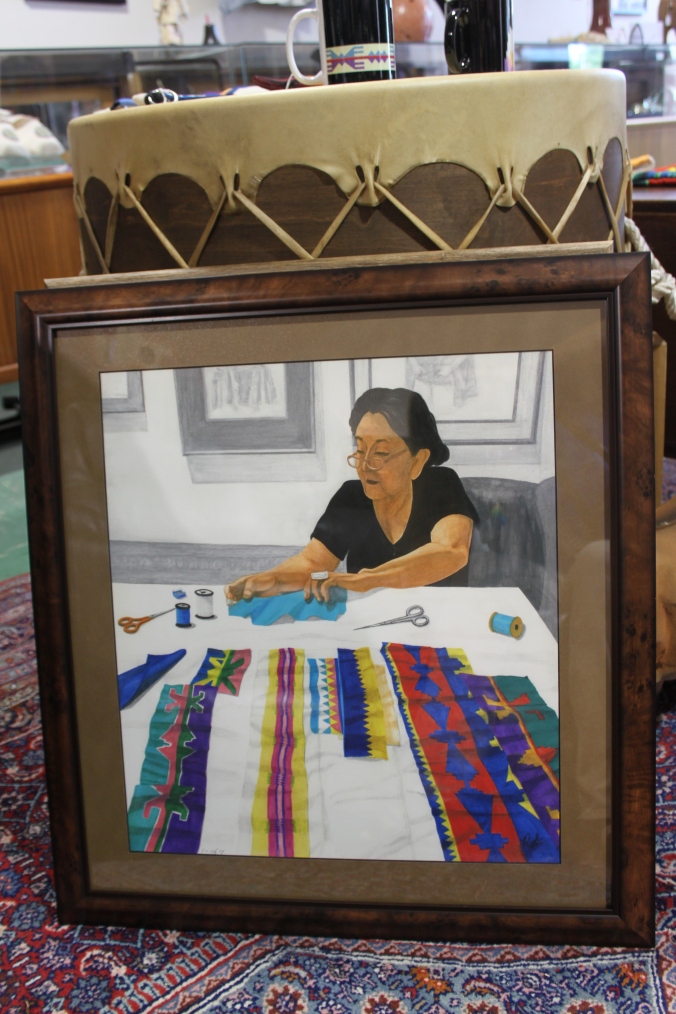 Painting of Red Corn doing ribbonwork. The original and cards of the print are available at The Water Bird Gallery in Pawhuska.

In June, while visiting the Water Bird Gallery, I ran into Kathryn Red Corn, who served as director of the Osage Museum for many years, was a member of the Osage Minerals Council and who provides step-on tours about the Osage murders. But there is another side to Red Corn — her skill at ribbonwork, which she calls “a dying art.”
“I started out in ribbonwork when I was really young,” Red Corn said. “My mom, her sisters and her cousins went in together and opened the Red Man Store, and all the spouses participated.
“They didn’t really know how to do all that stuff, but they learned it together. They learned how to cut the otter hides. Some of the men in the group learned to do moccasins,” she said.
Eventually, Georgeanne Robinson was the only one remaining who ran the store, Red Corn said.
“She lived in Bartlesville, and she’d drive over every day; that business stayed open 20-some years. I still have the business cards from it. The store had about four different locations. The last one was on Kihekah.
“But it was a one-stop shop where you could get everything you needed — the only such place,” she said.

These days, The Water Bird Gallery, owned by Danette Daniels, has taken on that responsibility.

“If Danette doesn’t have it, she can order it for you,” Red Corn said.

Ribbonwork is part of the regalia worn by the Osage during their ceremonial dances and on other items.

“Ribbonwork is layered,” she said. “You put your design in and then you put another ribbon, you put your design in that and some designs are just really difficult.
Red Corn described seeing one particularly complex design at a museum in Chicago, which she admired and wanted to re-create.

“I studied and studied and I couldn’t figure it out. John Red Corn gave me a copy of one to look at and I said, ‘I don’t think I can do this.’”

The traditional ways of constructing ribbonwork are going away, she said.
“It’s kind of becoming a dying art because people don’t want to take the time to cut each one, fold it under, press it, stitch it down and then go to the next little piece, so what they do is use Stitch Witchery with that glue on the back of it, cut it and go on to the next one and so it’s turning into a lost art,” Red Corn explained.

Ribbonwork is something that Red Corn learned from her mother, whose skill was highly sought after and respected.

Red Corn has a treasured cradleboard made by her family for her daughter, Julie, which is a family heirloom.

“My mother did the ribbonwork for the cradleboard, and my dad did the bow — because that’s an art too. Making the bow is from Bodark, that’s tough wood, and you have bend that stuff.

I have my daughter’s cradleboard. My mother did the ribbonwork, my Uncle Wakon did the yarn work, and my dad did the bow and the board and did the carving.

There’s a whole new ceremony that goes with all that. Put the baby on the cradle board for the first time, and there’s food, of course, she said.

A watercolor artist from Fairfax, Okla., Robin Elliott, wanted to paint someone doing ribbonwork. She asked Danette Daniels and that is how she found Red Corn. However, the two never met. The artist actually worked from a photograph of Kathryn doing ribbonwork, she said.

The watercolor, which is for sale at The Water Bird Gallery in Pawhuska, shows Red Corn doing ribbonwork. With a note of sadness, Red Corn shared that the artist, Robin Elliott, had passed away before Red Corn could meet her.

However, a reception, attended by Red Corn, was held on June 29 at The Water Bird Gallery to show the painting.

Prints of the painting made into cards are also available for purchase at The Water Bird Gallery, which is located at 134 E. 6th St. in Pawhuska. The gallery is open 11:30 a.m. – 5:30 p.m. Monday through Saturday.

For those interested in having Kathryn Red Corn do a step-on tour about the Osage murders, call Danette Daniels at the Water Bird Gallery at (918) 287-9129.