Re-published with permission of the Bartlesville Examiner-Enterprise

Dance Maker Performing Arts Academy has announced that principal dancer, Miki Kawamura, and soloist, Walker Martin, from the Oklahoma City Ballet are among the instructors at their summer intensive ballet camp sponsored by the Osage Nation Foundation to be held July 23 – Aug. 3 from 12 – 6:15 p.m.

Both dancers were lead performers in past a production of Wahzhazhe: an Osage Ballet, in Santa Fe, N.M. and they have generously agreed to give their time to elevate ballet in the rural town of Pawhuska.

I recall the first time I met Randy Tinker Smith in 2011 at the Osage Nation Museum. She told me that she had a vision for telling the story of the Osage through a ballet. I was impressed when just a year later, her dream became a reality!

I’d like to share a bit about the two organizations that foster dance in the Osage, both of which she directs.

Dance Maker Performing Arts Academy, located in Pawhuska, was established in 2014 by Jenna Smith, the studio’s Director of Dance, and Randy Tinker Smith, the Administrative Director.

Jenna Smith’s decision to establish Dance Maker stemmed from her desire to continue the legacy of ballet among the Osage begun by America’s first prima ballerina, Maria Tallchief, who hailed from Fairfax, Okla.

“Many young people have dreamed of following in the footsteps of famous Osage ballerinas, Maria and Marjorie Tallchief, by becoming ballet dancers themselves. The Dance Maker Performing Arts Academy will help them achieve that dream,” Jenna Smith explained.

Like the Tallchief sisters, Jenna is Osage. Jenna is descended from Clarence Leonard Tinker, the first American Indian in U.S. Army history to attain the rank of major general, for whom Tinker Air Force Base in Oklahoma City is named.

Jenna Smith earned her Bachelor of Arts degree from Oral Roberts University, and after graduation, joined the Osage Ballet, founded by her mother, Randy Tinker Smith, in 2012 to share the story of the Osage people through the artistic medium of ballet.

Randy Tinker Smith already had the storyline and the musical score for the ballet, but she had not chosen a choreographer because of budget constraints.

“The truth is I didn’t have money to pay the person who was supposed to choreograph it,” she confided.

Randy Smith met with dozens of Osage elders to ask permission to tell our story and then find out what I was allowed to use.

“Over the course of that year, I would relate to Jenna everything that I was learning from these particular elders and began weaving the final storyline together. Jenna’s plans were to stay involved in classical ballet at the time and she did not have time to help me with the Osage Ballet. But she couldn’t help but begin to picture the stories I was telling her and seeing them in a ballet. We are happy that even if it was by accident, we ended up having an Osage choreographer,” Randy Smith explained.

Audiences have embraced their efforts, and Wahzhazhe: an Osage Ballet, has been performed most notably at: the Tulsa Performing Arts Center, the Smithsonian’s National Museum of the American Indian in Washington, D.C., the Lensic Theatre in Santa Fe, N.M., the International Festival of Families in Philadelphia, Pa., and the Leach Theatre in Rolla, Mo.

Wahzhazhe is the actual name of the Osage people, which was mispronounced by Europeans when they saw the French spelling of a “W” which is “Ou”.

Wahzhazhe: an Osage Ballet, traces the history of the Osage people, beginning at a time before they encountered Spanish, French and other European explorers.

“The ballet depicts the Osage people as what some early diaries described as the happiest people in the world. Everything they did had order and everyone contributed in their daily living by way of a clan system,” Randy Smith said.

“When Europeans began to arrive, the Osage began trading with the French. But the Osage were in the way of economic drive of the Europeans to accumulate land, metal and fur. Treaties were made and broken as the Osages were moved westward numerous times until they finally bought their own reservation which is now Osage County.”

The ballet also features a “roaring 20’s scene” when after striking it rich as Osage Minerals Estate shareholders, the Osage people became the richest people on earth per capita.

“The local population swelled to the tens of thousands as people moved in to grab a part of the wealth. Greed ran rampant among the invasion as the Osages were once again pushed aside and murders were committed in an attempt to collect insurance money or to gain control of the valuable oil properties,” Randy Smith said.

“Osages honor our soldiers. An entire scene in the ballet is dedicated to these courageous warriors,” she added.

The ballet concludes with an Osage dressed in a business suit wearing moccasins. As he walks across the stage he hears an Osage drum and begins dancing in the traditional Osage style, to convey that today the Osage “walk in two worlds.”

In 1946 Tallchief married the famed choreographer George Balanchine. Although they separated in 1951, Balanchine created a ballet entitled Firebird to showcase Tallchief’s talent at the New York City Ballet.

One Osage elder has said, “Elizabeth Maria Tallchief, who was born in Fairfax, Oklahoma, in 1925, will always have a special place in Osage history and in the hearts of the Osage people. Her great talent as a prima ballerina transformed and elevated in stature the ballets in which she performed and touched audiences throughout the United States and Europe. Her life will always stand as a shining beacon for Osage young people of how dedication to one’s God-given talents can be translated into great artistic achievement.”

Maria Tallchief’s performance of the Sugar Plum Fairy in The Nutcracker is credited by many as having established the ballet as a Christmas classic.

In December 2017, Dance Maker held its first performance of The Nutcracker to a sold-out audience at the Constantine Theater in Pawhuska, a ballet which they endeavor to produce annually Jenna Smith said.

According to Randy Tinker Smith, tuition is $290 and many scholarships are available through the Osage Nation Foundation. All students wishing to learn are encouraged to attend. Dance Maker serves the whole community – not just Osage students! 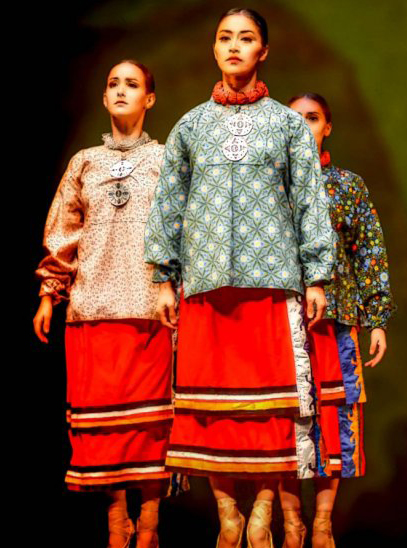