Al J. Kester at his childhood home on Cheyenne Ave. in Bartlesville.

Al J. Kester, a life-time resident of Bartlesville, sat down in his childhood home, to share his memories of growing up with his father — a prominent Bartlesville bootlegger during the Prohibition era.

Kester’s father, Amos Lovelin Kester, was born in 1903 in Kansas and traveled to Oklahoma on a covered wagon with some cattle and initially settled in Dewey, Oklahoma.

Amos Kester became a bootlegger to make ends meet during the Great Depression, when jobs were scarce.

“Before I was born my dad was working for the Sinclair Prairie. In them days people were lined up looking for a job. There were a hundred people there to take your job in case you did not show up or you didn’t want it. It was a hard time. People were hunting squirrels and getting rabbits to eat – raising a few hogs, chickens — so they started making moonshine whisky.

“There was a place in the 20’s, 30’s and 40’s where they had these parties at a place called Chimney Rock. Well the road went on around that big old hill and there was a house back there and my dad and his brothers and a friend of his started making moon shine whiskey and they were selling it – trying to make a living.

“My dad got married and he decided to start selling bonded whiskey and stop selling moon shine whiskey, so he moved right down here on the corner of Santa Fe and First Street.

“My dad was the main bootlegger here. When I moved to this house, Prohibition was still going on and my dad was making moonshine whiskey. He decided to make bottled whiskey, so he started selling whiskey.”

In those days Hensley Street, the cross street with Cheyenne where he grew up, was called First Street, Kester said.

“Well, right there was a building and a house. My dad rented the house and he started selling bonded whiskey and he got a federal stamp from the federal government to sell bonded whiskey.

“As the years went by, there was a house for rent up here on Cheyenne. My dad rented that house, and started selling whiskey out of that house. When I was about one year old, they bought the house they had been renting here at 107 Cheyenne where I’m at right now.

“I bought the house by paying the taxes on it and moved back in several years ago. Glad to be here.

“Anyway, so he bought this house and moved over here when I was six years old and he continued selling bootlegged whiskey. The people liked him so well that his business grew and grew and grew.”

“I was a little kid. I would get in the car and go with my dad and he would pull up in front of the building at five o’clock in downtown Bartlesville, and people would be coming out and he would carry in little baskets of whiskey.”

Kester named three prominent business leaders of the era, who have since passed on, and said, “they gave him permission to take the whiskey down there because they really liked my dad.”

“My dad also delivered whiskey to the hotel and another club. He had a booming business,” Kester said.

“They would come over and they would set around our table and talk and they trusted my dad and gave him power to sell his whiskey. According to Kester, these men even consulted Amos Kester about who to name as police chief and they listened. His father was the one who let the man know he’d soon be named police chief.

“The number one bootlegger telling the policeman, that he got the job and that he was going to be Chief of Police – that was something else,” Kester recalled.

His father even had a say in who became the Washington County Sheriff in those days, Kester said.

Amos Kester was not the only bootlegger in the region Kester said.

“There was a man who was a bootlegger who bought a farm on the Oklahoma Kansas line up by Coffeyville, Kansas. He would go into Missouri with his trucks and get truckloads of whiskey and take to this barn and unload on the Oklahoma side and then he would deliver the whiskey to all the bootleggers in Tulsa, Bartlesville, Claremore and all over the state and country and they had no bigger whiskey hauler. His name was Big Mack McCormick. He lived in Collinsville, Oklahoma. He always was wearing those big beautiful suits and wore a hat like Al Capone.

“There was another whiskey hauler named Johnny McCall. He looked like a movie star and talked like Frank Sinatra. Finally, he went over to Grand Lake and opened a store and got out of the whiskey hauling business.

“There was another little guy named Ralph Davis and he could have been a doctor, but he wanted to be an outlaw. His dad was a surgeon. Ralph Davis always wore beautiful suits and he would come into Bartlesville and go in with the rich people and get in the card games and find out where the jewelry was and where they kept their money. He was an outlaw deluxe – mafia connected I believe.

Things did not end well for all who took up the bootlegging profession, Kester recalled.

“One time Little Ralph [Davis] called my dad and said, ‘Amos, I got seven cases of Yellowstone.’ (Yellowstone was a type of whiskey). I’m out here on Virginia Road. In them days it was almost a one lane road out there going towards Oak Park, so my dad drove out to buy the seven cases of Yellowstone from him and he said, ‘Amos, the feds is after you and he had another guy with him and he was called J. Eddy. He said, ‘we got to leave the country.’ So time went by. Someone brought the newspaper over to my dad and it showed a photo of Ralph shot plum-full of holes.” 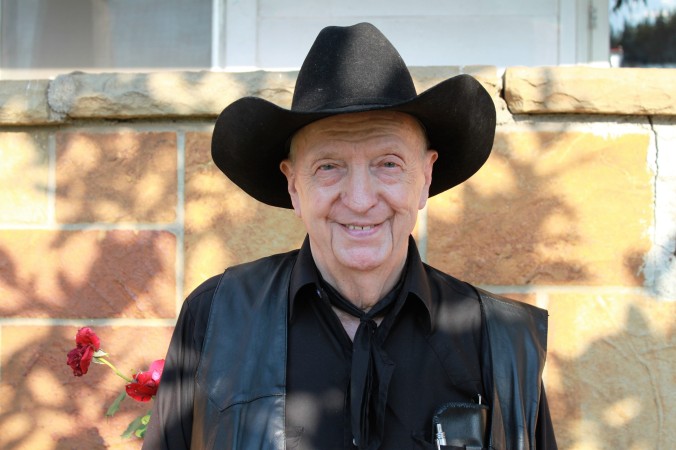 Amos Kester, who lived to be 80, never did get caught. Al J. Kester, who is 77, decided to walk a completely different path as a cowboy and family man, but that’s a story for another day. Watch for an article about Al J. Kester’s youth and days as a rodeo champion, coming soon!