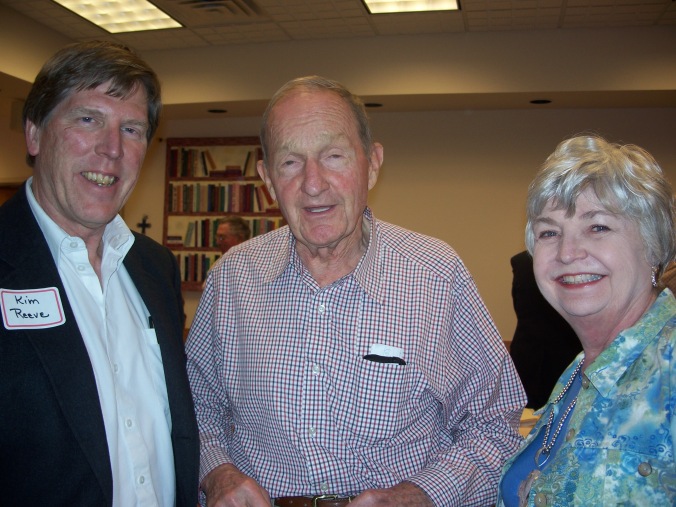 Photos and Story by Roseanne Sutton

Recently, a group of concerned citizens met at the Pawhuska Library with BKL, Inc., the company that completed the courthouse feasibility study, in order to get a better understanding of the issues in anticipation of the public hearing set for 6 p.m. on April 26 at the Osage County Fairgrounds Ag Building.

Bill Knowles and Kim Reeve both have ownership interests in BKL, Inc., a civil engineering and architectural firm founded in 1946, which the Osage County Commissioners had employed to complete a study regarding the feasibility of either renovation of the courthouse or construction of a new one. BKL, Inc. has an impressive record of having done courthouse renovation plans and courthouse construction plans in this region. For more information about their work, visit their website at http://www.BKLINC.com.

At the meeting, the tone of citizens was respectful but concerned as each person had an opportunity to speak with BKL, Inc. representatives and Commissioner Jackson. Once everyone had been heard and BKL, Inc. had responded, it became clear that these citizens, who supported the idea of preserving the courthouse, felt troubled that the County Commissioners had not instructed BKL, Inc. to do the feasibility study from the perspective of the District Ten Courthouse being preserved — an historical structure which attracts tourism to Pawhuska.

Situated on the highest hill, the courthouse, constructed in 1914 for $80,000, can be seen for miles around and is beautifully constructed – reminiscent of an earlier time in Pawhuska.

County Commissioner Bob Jackson pointed out that some county employees and Osage County residents who come to Pawhuska to do various kinds of county business, taxpaying, visiting the zoning and planning department or the district attorney’s office, find it more convenient to go to one centralized location. Out-of-towners come to Pawhuska and have a hard time navigating around town to find out where county offices are located, Jackson said.

However, the concerned citizens at the meeting, challenged the premise that all of the offices needed to be in one location. Lu King brought up the problem of parking on the hill if the courthouse were renovated or rebuilt. The new construction would decrease what is already limited parking. King and others wanted a study which would evaluate the idea of having the county offices in a downtown location, such as the Whiting Building along Kihekah Ave. “There’s a huge parking lot behind it,” King added.

“Let’s take a look at some of these things that can help preserve the downtown and meet the needs of the community offices,” said Frederick Ford Drummond.

“The Whiting Building could be renovated to be lovely and meet the needs of the county office and preserve the historic character of the downtown community,” said Lu King.

County Commissioner Bob Jackson who had voiced concerns about abandoning the downtown at public county commissioner meetings previously, appeared to see both sides of the argument. However, Jackson said that security was a concern in determining the best solution.

Frank Lorenzo, a retired architect, asked, “The planning commission has a strong connection to the assessor. Could those be moved downtown?” Lorenzo added, “City planning for growth needs to be considered.”

BKL, Inc. representative Bill Knowles said that his company was well acquainted with, and sensitive to the concept of architectural historic preservation. However, BKL, Inc. had not been instructed to focus on this in the feasibility study, he said. After the meeting adjourned, Knowles told Pawhuska Community News, that he had begun the feasibility study process with County Commissioner Clarence Brantley, who had told Knowles he would personally speak to the Osage County Historical Society. However, Brantley became ill and died unexpectedly. As a result, Brantley’s intentions could not be carried out.

Instead, the study evolved into a very analytical approach to the most efficient method of bringing all of the Osage County offices under one roof.

The challenges of bringing the courthouse up to current building codes, while making room for the departments currently scattered in offices on Kihekah Ave., were emphasized by Bill Knowles in public meetings with the county commissioners in the last quarter of 2010.

Reeve introduced Dr. Cathy Ambler. “She’s very valuable to us. She has a very strong body of knowledge. We would use her consulting services in this instance. We didn’t discuss this with her because we didn’t want to spend money unless it was going to happen,” Reeve said.

Overall, the meeting was an opportunity to examine the validity of the premise that all of the county offices should be either put under one roof or in a renovated courthouse/annex.

Instead, the citizens at the meeting wanted to consider a third option – updating the courthouse and moving other related county offices to a renovated location downtown.

“The county commissioners need to give the architects the latitude to really look at it and come back with what really makes sense,” said Kathy Swan.

With the feasibility study complete and BKL, Inc. already paid in full, this raised another question, voiced by Terry Loftis. If a third option were considered, who would pay for it? “You’re not doing this out of the kindness of your heart. What will this cost?” Loftis inquired of BKL, Inc.

Reeve responded, “We don’t make money on every project … We are under contract … We set a dollar amount because clients need to be committed to it – otherwise they’re not invested in the project.
“We’re committed, although maybe not contractually, to talk to groups … Obviously, it’s in our best interest long term …

“Maybe we have not done all the professional services we should have.”

Pawhuska, a town originally build with oil money, which is the home of the Osage Nation, is currently in the process of redefining itself.

The Osage Principal Chief John Red Eagle elected in 2010 has publicly, and repeatedly, expressed his commitment to partner with the city of Pawhuska on projects to showcase Pawhuska’s historical significance.

He has already demonstrated this commitment by partnering with the city in the Pawhuska Business Center project, the city’s splash pad for children, and in the joint application between the city and the Osage Nation for an Oklahoma Department of Transportation (ODOT) grant application. If awarded, the ODOT grant would facilitate the first phase of renovation of downtown Pawhuska for pocket parks and/or plazas containing bronze statues of people such as: Osage Chief Pawhuska and Actor Ben Johnson.

Local leadership in Pawhuska and the Osage Nation’s Principal Chief have expressed their desire to preserve the uniqueness of Pawhuska while improving its infrastructure.

With the issues now in focus, the stage is set for Tuesday night’s meeting to really discuss these issues and, rather than pointing fingers, commit to finding the answers.

Plan to have your voice heard by attending the meeting at the Ag Building of the Osage County Fairgrounds on April 26 at 6 p.m.